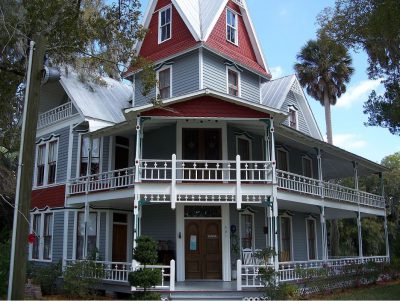 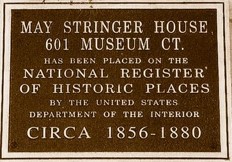 The May-Stringer House is a 4 story, seven gable, gingerbread trim, 14 room “Painted Lady” Victorian era home overlooking the City of Brooksville.  The Hernando Historical Museum Association has created exhibit rooms with a Victorian Look, and there are rooms devoted to specific themes such as an Elegant Dining Room, Victorian Bedrooms, Military Room, an 1880’s Doctor’s Office, and a 1900s Communication Room. The house is on the National Register of Historic Places.

In 1842, The Armed Occupation Act ratified by the U.S. Congress, stated: “any settler who came to Florida, lived on the land for five years, cultivated five acres, and built a dwelling would be granted 160 acres”. Richard Wiggins homesteaded the land were the May Stringer house is located.

In 1855, John L. May purchased the property and built a 4 room home for his family. John lived in the simple four-room house with his wife, Marena, and their daughters, Matilda and Annie.  Unfortunately, John died of tuberculosis three years later.

Marena remained in the home throughout the Civil War and eventually married Confederate hero Frank Saxon. She died giving birth to the couple’s child, a girl named Jessie Mae, in 1869. Jessie survived her birth but died of unknown causes three years later. Marena and Jessie were buried on the property, as were John May and the infant son of Frank and Marena, a detail which fuels many rumors about the May-Stringer haunting. It is known as one of the most haunted houses in Florida. (see Ghost Tours on homepage)

Frank Saxon sold the home, and the property eventually made its way to Dr. Sheldon Stringer. The doctor added ten rooms to the house giving it the Victorian  appearance it has today.  The estate also served the doctor’s  medical practice for many years.

After the death of the Stringers, the house passed from one owner to another until Dr. Earl Hensley and his wife Helen sold it to The Hernando Historical Museum Association in 1980.

Tour the Parlor, Elegant Dining Room, Victorian Bedrooms and much more.  Our docents will give visitors stories of the house, bring us back into history.