Open on:  Saturday’s Only 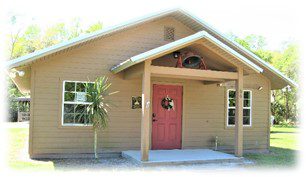 The Countryman Family One Room Schoolhouse is reminiscent of the First Schoolhouse in Hernando County built in 1852 by Fredrick Lykes. We will bring you back in time to experience our school lessons while sitting in authentic wooden desks. Our interactive lessons include the 3 R’s and life skills like carrying water jugs from the local well.

On 1999 Gretchen Countryman became a docent at the May-Stringer Museum. As a child Gretchen attended a one room school in upstate New York. She grew up to become an elementary school teacher. The school exhibit was first located at the May-Stringer house. It soon became apparent that more room was needed.

So, Gretchen and the Executive Director of the museum Virginia Jackson searched for an authentic one room school building. Due to the Florida weather and termites none where found. They made the decision to build a one room schoolhouse.

Gretchen went into action. Fund raising became her priority. For over ten years, she gave talks, held yard sales, wine tastings, a golf tournament, and solicited donations wherever she could. One company made a large donation. Family, friends, and other donors interested in supporting the project helped. The goal of sixty thousand dollars was finally reached in 2014 and construction began. 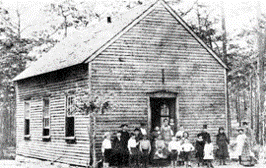 The building is patterned after the 1852 Lykes School, except for a few modern conveniences like electricity and a wheelchair ramp.

The Countryman Family One Room School has a program to honor a deceased (or living) relative or friend. Maybe you want to celebrate a birthday, anniversary, or accomplishment.

The schoolhouse is selling personalized engraved brick pavers for these occasions. This is a forever gift.

The pavers will be permanently installed on a walkway in front of the school. The cost is $50 for a 4” by 8” brick with 3 lines of text, 13 characters per line.

Please download, print, and fill out the form.  Downloaded Form will be found in your download folder. Then drop it off at one of the museums or submit it to:

Pavers may also be ordered online through the Honor Walk Program.  To order a paver click here.