In 1980 The Hernando Historical Museum Association leased the house located at 601 Museum Court, Brooksville with an option to buy.  In 1985 the purchase was completed, and the May-Stringer House became the first Museum in Brooksville.  Volunteers completely restored the House with the help of grants to buy the materials.

In 1991 The Hernando Historical Museum Association purchased the 1885 Train Depot along with an acre and a half of land at 70 Russell Street from CSX Railroad for $12,600 and restored the building.

The Countryman Family One Room Schoolhouse is a new structure built in 2014 and completed January 2015 after fourteen years of fundraising by Museum volunteers, especially Gretchen Countryman.  It is next to the Train depot at 66 Russell Street.

The Hernando Historical Museum Association is a 501 (c) 3 nonprofit organization.  The Association is governed by a Board of Directors.  The organization is completely run my volunteers that wish to celebrate and preserve the hard work and ingenuity of generations past, and to inspire current and future generations to value this industry which was essential to Florida’s history, culture, and economic growth.

The current Board of Directors are: 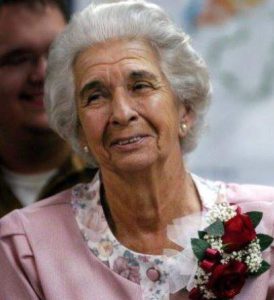 She was a staff member of both the Pinellas County and Hernando County Public School Systems and was cafeteria manager at First United Methodist Church, Brooksville.

Virginia has written more than 25 books on the history of Hernando County. She donated the proceeds from all her books back to the Heritage Museum of Brooksville.

In 1998, she received the Humanitarian of the Year award. She also received an award from T.O.R.C.H. In November of 1998 Virginia was appointed to the Board of Advisors of the Tampa Regional Preservation Citizen Support Organization by the Secretary of State, Sandra Morthan.

In 2001, Virginia spearheaded the restoration of the 1885 Russell Street Train Depot. She received grants from the division of Historic Preservation State of Florida. She has been collecting genealogical information and documents for the benefit of the public.

In 2004, Virginia was voted the Great Brooksvillian by the City of Brooksville. As a director the the 1885 Train Depot, Virginia was in charge of the volunteer program. Virginia stepped down from her position in 2013.